This history of St. Anne’s Church was taken from the book “The Action Priest.”  It was written by Father Lauro and Arthur Orrmont and it tells of Father Joe’s very driven and dedicated life to spreading the faith.  The beautiful parish churches of St. Elizabeth’s in Eureka Springs and St. Anne’s in Berryville were due to the great work of Father Joseph Lauro.  He’s a man of action.  As soon as he saw what he had to do, he went out and got people to donate materials and get the project started.  He was also a very loving and kind man that would do anything for you.  His book recounts all the experiences of his life of bringing the love of Christ to his job as a pilot in the Royal Canadian Air Force in 1941, and as a bomber pilot in the US Air Force in 1943, and as a priest to the people of Arkansas from 1949 to 1962.  After this he was called to the poor people of Ecuador in Central America until his death in 1971.

Father Lauro was ordained May 17, 1949 at St. Andrews Cathedral in Little Rock.  His first assignment was to Harrison, Arkansas to assist Father Harry Chinery at Mother of God Church Mission which covered five counties.  Father Joe would be responsible for Eureka Springs’ church, St. Elizabeth.  It needed restoration and Katy Morgan invited him to live with her and her husband while the church was being rebuilt.  Father Joe had it finished by the fall of the next year, 1950.  The rectory was built in 1954 and was donated by Carl Koch of Eureka Springs

With the growing congregation from Berryville, Father Joe decided that Berryville needed a church.  The church would cost about $120,000.00 to build.  In June 1954, Father Jim Burke of Chicago sent him $5,000.00, and Monsignor Lux of Chicago also sent him $5,000.00 from the Catholic Extension Society.  Father Joe had Carl Koch look for land for the church.  When it was found that the Catholic Church wanted it, the price of the land doubled.  John Torok, a Berryville accountant, owned a piece of land with his wife, Billie, and Homer Jackson.  They wanted $3,500.00 for it but Billie convinced her husband to donate their half to the church and Father Joe could buy the land for $1,750.00.  John Torok was Catholic but Billie and Homer were Baptists.  Father hired Lawrence Putnam and Wayne Johnson as contractors.  They were Protestants also. Some antagonists were against building the Catholic Church but Father ignored them.  Most of the Protestants in Berryville and Eureka Springs were for building the church. The architect was Frank Polito of Chicago and he did his drawings at no cost.

Father Lauro had bought the property, hired the contractors and received the blueprints before he went to Bishop Fletcher in Little Rock for permission to build the church in Berryville.  The Bishop was surprised with the Protestant support for the building of the church.  The Protestant women even had a fundraiser bake sale for the church.  The Green Forest and Berryville banks donated $50.00 each.  Hanby Building Supplies sold him supplies at cost.  Father bought a used heating system from a Protestant church in Springdale.

Charlie Nelson donated the church doors.  Jack Cadelli from Fort Smith did the terrazzo floors.  Wayne Johnson helped put up the two-ton cross through the roof over the church entrance.  The altar was ordered from an Italian sculpture near Rome.  A $1,000.00 donation for it came from Father James Burke.  Wayne Johnson and Father Joe went to New Orleans with Wayne’s truck to pick it up from the boat and it was so heavy that they had three blowouts on the way home.  The Sacred Heart statue in the courtyard was purchased for $175.00.

On November 15, 1958, Archbishop O’Brien, Bishop Fletcher and Monsignor Murray came for the dedication of the new church.  Bishop Fletcher remarked how beautiful and big it was.  He said “I didn’t know you were going to build a cathedral.”  When Father Joe sent him the plans, he had conveniently left off the dimensions.  It was Gothic in style and constructed of stone from Carthage Missouri ninety miles north.  The church cost $60,000.00 which was raised by various contributors and was completely debt free.  It was three times the size of St. Elizabeth’s and the largest church in Carroll County in 1958.

After the dedication the prelates were invited to Billie Torok’s home for tea.  She had borrowed Mattie Hanby’s curtains and silverware for the occasion.  The Bishop and Archbishop came in smoking big black cigars and Bishop Fletcher remarked the hospitality of this half Baptist house doesn’t bother them a bit. 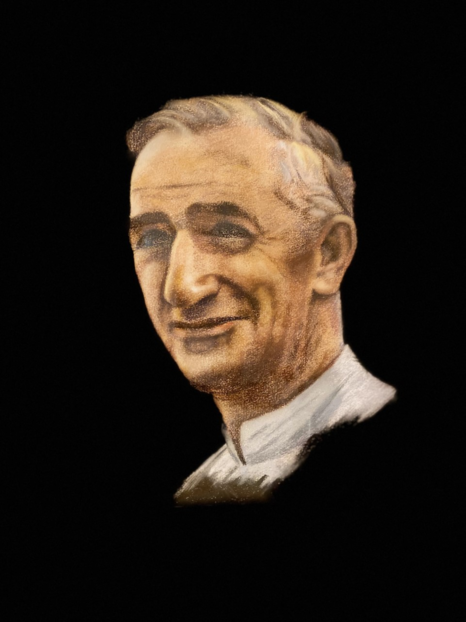